John Park's wide-ranging career has taken him from Hollywood, where he appeared on HBO's award-winning "Larry Sanders Show" starring Garry Shandling, to Las Vegas, where he performed in "Splash" at the Riviera Hotel and Casino on the Strip. At the invitation of the late Bill Graham, John opened for Huey Lewis and the News, The Grateful Dead, and the Jerry Garcia Band. 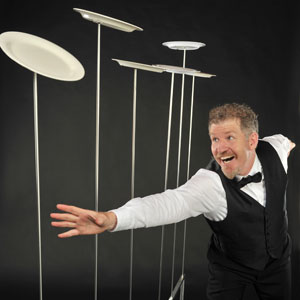 He's performed on Persian rugs in Saudi Arabia for ex-pat oil workers, and even taken his act to sea, where he's played for the passengers of the SS Azure Seas as well as Senator Dianne Feinstein on a historic schooner, the Dolph Remp. John's engaging performances have won over audiences like top executives at Microsoft and IBM, for whom he's put together corporate shows, Ontario television viewers who were lucky enough to catch John on CityTV's Breakfast Television, and festival-goers around the world, including attendees at the New Zealand Festival of the Arts, the legendary Edinburgh Fringe Festival, and the Moers Comedy Festival in Germany, where John wowed the audience for eight straight hours as the festival's emcee.